You are here: Home > News > Bousfield impresses with Rota 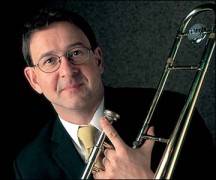 Ian Bousfield has been receiving plenty of praise from the music critics, following seven performances of the Nino Rota Trombone Concerto during Septemberin Vienna, Tokyo and Lucerne.

The composer allows himself something more modern with echoes of the neo-Classical in his 1969 Trombone Concerto. Vienna Philharmonic solo trombonist Ian Bousfield played it brilliantly, with an explosive weight of tone, but also with the most delicate piano and much cultured legato playing. The full house cheered.
Gerhard Kramer, Wiener Zeitung, 4/9/08

After so much mediocrity, soloist Ian Bousfield came across almost like a pedant in the trombone concerto. Rota packed one amusing, grotesque turn after another into his work: wind band and hunting music, then tributes to Alban Berg and streamlined, concentrated poetry in the second, slower, movement. The lesson of the evening is that brass can sound smooth and elegant, without losing intensity. And Rota has more to offer beside the soundtracks to Federico Fellini's movies or The Godfather. This elicited the most intense applause of the evening.
Vienna Online, 4/9/08

All the more gratifying was the consistently masterly interpretation of his (Rota's) trombone concerto, which was hardly surprising given the customary mastery of Vienna Philharmonic trombonist Ian Bousfield.
Daniel Wagner, Wiener Zeitung, 28/9/08

Then, not just awake, but totally alert, the Philharmonic soloist Ian Bousfield acted in the Rota Trombone Concerto, with whom one could yet lose the assumption that fewer of the Italian composer's “serious” works would survive much longer than his film scores
Walter Weidringer, Die Presse, 28/9/08