You are here: Home > News > BTS Magazine out now! 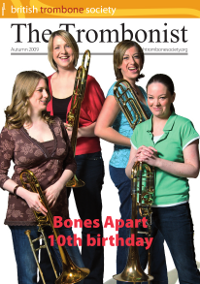 This week, BTS members have been receiving their new issue of The Trombonist. The Autumn 2009 issue is bursting with articles and news from around the UK. Highlights from this issue include: