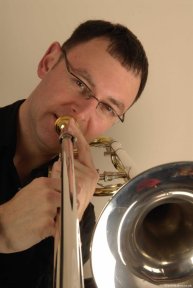 Nigel Hall reported on the new piece and Brett's other contributions to the concert:

Darrol has managed to compose a piece that tests both the virtuosity of the soloist and the band, without compromising the ability of the audience to appreciate the music and the performance with received enthusiastically by the audience. The concerto itself starts with a slow melody accompanied by "shimmering" muted cornets underneath before the tempo increases. The second movement is a slow 6/4 melody with crossing rhythms whilst the accompaniments settle on crotchet quaver firstly on trombones before moving to the baritones, euphonium and basses. The final movement is almost a rondo where the same figure keeps returning, and with a metronome marking of crotchet = 168 the soloist will need to be quick on the slide! Overall only the very best of soloists will do this work justice and the band parts, whilst tricky, will be achievable by bands 2nd section and above. The piece is scored for soloist in addition to the three trombones in the band, making it ideal for this type of concert.

Changing the mood Brett then played a new arrangement by Paul Sharman of the well known traditional tune, Londonderry Air. With its lush harmonies and a soft tone from the soloist this piece sounded fresh and could become a popular choice for trombone soloists of all abilities.

Before leaving the stage, Brett then joined the Band's Principal Cornet player, Liam Carey for a humorous rendition of Howard Snell's arrangement of Rossini’s Duet for Two Cats, that had the audience chuckling as the two sallied back and forth with harmon mutes drawn.

Brett Baker then returned to the stage in the second half with a sublimely gorgeous reading of John Golland’s arrangement, originally for JSVB, of Glen Campbell's By The Time I Get To Phoenix. Brett’s tone quality in the upper register adds a different dimension to slow pieces and this piece was no exception. With sympathetic support from the band this was a masterclass in how to perform a slow melody.

Brett’s final offering was an arrangement, by the band’s MD Alan MacRae, of the Nina Simone classic Feeling Good, which was originally arranged as a flugel horn solo that Brett had "hi-jacked" for the night. The soloist’s ability to switch from a rich mellow tone to the slight edgy sound to emulate Miss Simone’s vocal style at the drop of a hat is what makes Brett Baker one of the finest exponents of the instrument.

With the audience calling for more, Alan then called Brett Baker back to the stage and finished with Brett once again wowing the crowd with a virtuosi performance of Arthur Pryor’s Fantastic Polka: so many styles of playing in one short piece.

The audience left the hall praising the skills of not only the soloist but of the band which accompanied him so well throughout the evening.