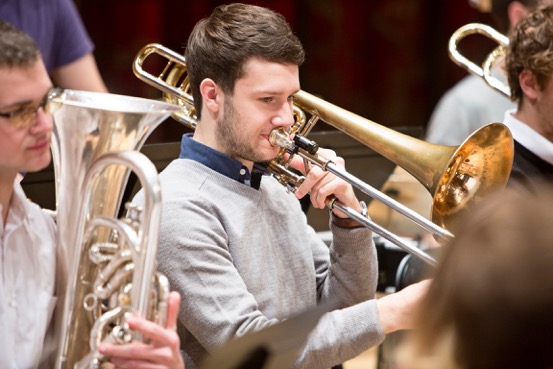 The Hallé Orchestra’s long search to fill the Principal Bass Trombone chair is over. After a competitive two year process the appointment has been awarded to Kyle MacCorquodale, a 22 year old bass trombonist currently studying at the Royal Conservatoire of Scotland.

Kyle received the news via a phone call from the Hallé’s Music Director, Sir Mark Elder. After hearing the news, Kyle said: "the call came completely out of the blue, but I am absolutely delighted and can’t wait to get started. I have loved working with the orchestra so far. They are outstanding musicians but it’s also a very supportive environment and a nice atmosphere to work in, which is important when you are going to be spending a lot of time with each other."

As a student, Kyle has had a number of competition successes, including victories at the Besson Scottish Solo Championships and the Bob Hughes Bass Trombone Competition. In 2016, he was a finalist in the BBC Radio 2 Young Brass Award, performing live on air.

After his appointment was announced, Kyle thanked the Royal Conservatoire of Scotland and his teacher Chris Stern, who he said "has been a fountain of knowledge and has shared his decades of experience as an educator and performer at the highest level."