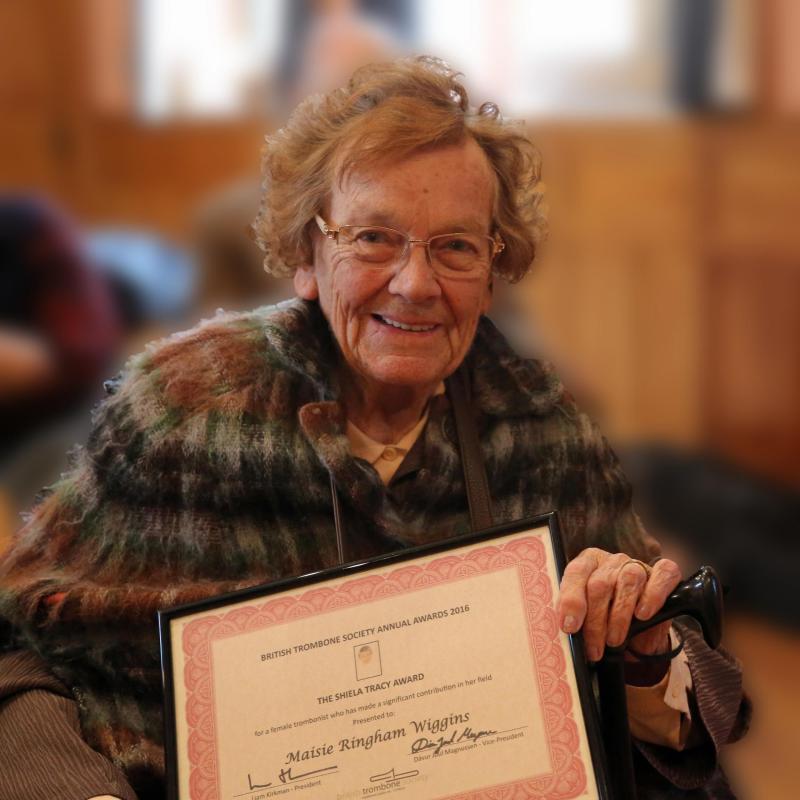 It is with great sadness we report that Maisie Ringham Wiggins passed away on Saturday, 3rd December.

Maisie was a life-long Salvationist and former principal trombone of the Hallé Orchestra under Sir John Barbirolli from 1945-55. She was an inspiration to many. Ever modest, Maisie accepted the Sheila Tracy Award at this year's Annual General Meeting "on behalf of all female trombonists everywhere."

Maisie began studying the trombone at age 10, her father being her first teacher. A year later, she took part in a Divisional Young People's Festival in Ipswich, giving an impromptu performance of Unfathomed Love. The solo was such a success that she was regularly appearing in Salvationist concerts and other events as "The Wonder Girl Trombonist."

She was awarded a scholarship to study at the Royal Manchester College of Music (now the RNCM) and while still a student, featured as a soloist on several recordings. Following her studies, Maisie successfully auditioned to become principal trombone of the BBC Midlands Light Orchestra. Her tenure was cut short after just over a year when she received a telegram from Sir John Barbirolli inviting her to join the Hallé.

Maisie was a true legend in her field, and inspired many through her teaching. We have lost a light, and the angels have gained a great trombonist. R.I.P. Maisie.