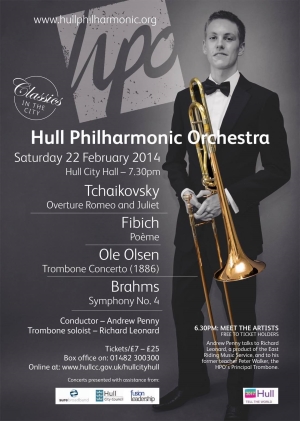 Norwegian composer Ole Olsen (1850-1927) wrote his trombone concerto in 1886 and it was left neglected for over a hundred years until it received its first performance and recording by Christian Lindberg in 2010. The UK premiere of this lyrical and colourful concerto will be given by Richard Leonard and the Hull Philharmonic Orchestra on 22 February 2014 at Hull City Hall.

Richard Leonard is a student at the Royal Conservatoire of Scotland and a former Star of the Future featured in the BTS magazine, The Trombonist.