You are here: Home > News > Quartet launched in Coventry 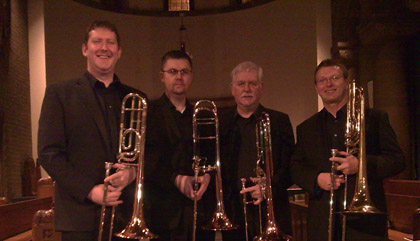 On Wednesday 7th January a trombone quartet based in Coventry gave their first concert in St Mary Magdalene church to a reasonably large and very enthusiastic audience. The members of the quartet were Julian Smith, Jon Webber, Derrick Parker, tenor trombones and Mark Howarth, bass trombone.

To demonstrate the versatility of the trombone the programme contained original works and arrangements including, Another Openin’ by Cole Porter arranged by the late John Challis, Ray Premru’s In Memoriam and Beethoven’s 3 Equali. Mark performed an arrangement of Mozart’s O Isis und Osiris and Derrick gave a rendition of The Acrobat on a trombone from 1918 to give the audience an idea of how the trombone used to sound until the middle of the 20th century. Instruments ranging from G&D bass trombone to a soprano trombone were also demonstrated and gave the audience an insight into the trombone family and how the sound is created.