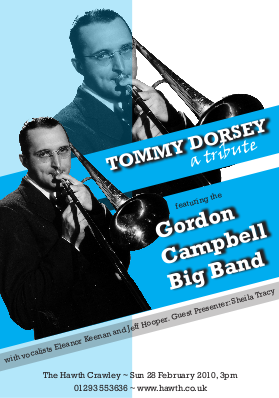 Gordon Campbell has put together a concert in tribute to one of the past century's best known trombonists, Tommy Dorsey. This one-off takes place at The Hawth theatre in Crawley, West Sussex on 28th February.

Tommy Dorsey led his band to success in the 1930s-50s, often featured on radio and television. The band made scores of recordings, many of which featured the singing of Frank Sinatra. 286 recordings made the Billboard charts, 17 reached number one, and 3 made it into the Grammy Hall of Fame, including his signature piece I'm Getting Sentimental Over You.